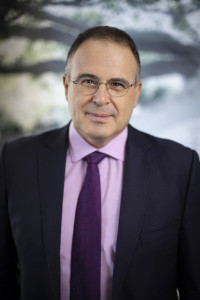 Bruce Whitfield is a multi-platform award-winning financial journalist whose creative and engaging presentation makes money matters accessible to a broad audience. He graduated with a Bachelor of Journalism degree from Rhodes University and has been practicing as a journalist for over two decades.

He has been named Sanlam Financial journalist of the Year in 2014 and Sanlam Radio Financial Journalist of the year in 2014 and 2015. He’s also been crowned Citadel Words on Money Overall Winner for personal finance writing; was named Citi South Africa Financial Journalist of the Year in 2009 and completed a course at New York's famed Columbia Journalism School as part of that programme. Bruce has won numerous other accolades for print, radio and television in the Sanlam and Citadel awards over the past decade as well as multiple wins for best financial broadcaster in the MTN Radio Awards.

Bruce presents The Money Show on 702 and CapeTalk, hosts Tonight with Bruce Whitfield on CNBC Africa and is a columnist and writer for the Sunday Times Business Times. He is also a sought-after public speaker, MC and conference facilitator.

Events that was hosted by Bruce Whitfield